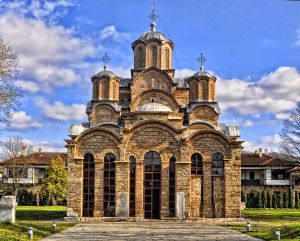 Gracanica monastery was built by King Milutin on 1321 and dedicated to Dormition of Virgin Mary. The construction of the monastery began at 1310 and last until 1318 after which being frescoed in the following three years. Historical circumstances, under which the construction of the current church ran, are well documented. The main source of the information’s is the foundation charter of the monastery issued by King Milutin which is entirely preserved on the west wall of the south side of dome. The charter is written in 53 lines and it ends with ornate kings signature and the year 6830, according to byzantine calendar (1321, according to Julian calendar), located in lower right part of the Charter.
Gracanica monastery is located in the settlement with the same name 10 km south of Pristina. Written sources, as well as the destruction of the monastery complex of supporting facilities certainly testify the turbulent history of Gracanica. It is considered that the first time was burgled after the Battle of Maritsa 1371, and mentioned within as a part of long prayer to the Virgin Mary which is been preserved in one manuscript.  Monastery was also desecrated in XVIII century, when the notorious Yashar – pasha ordered to strip the lead cladding from the roof and raise the stone slab from the floor for the needs of his constructions in Pristina. During the WWI, more precisely November 1915, Gracanica was burgled by Bulgarians
The time of 14th and 15th century was the period of great spiritual glory of the monastery. About hundred monks lived in Gracanica which developed very intensive spiritual and artistic activities. In the second quarter of the 16th century here it has been the metropolitan center of Novo Brdo, who founded the first printing office within the territory of medieval Serbia 1539. Later, due to the large Ottoman oppression, the monastery was abandoned and the church used for parochial needs.
After the WWII, the monastery was rebuilt by nuns and since then it serves as a nunnery. Today it is populated with 20 nurses engaged with icon painting, embroidery, agriculture and other monastic obedience’s.
Architecture 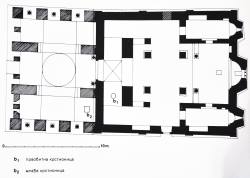 Current basis of Gracanica monastery consists of two parts: first part is consists of the main church originally constructed as a whole, while the other part consists of exonarthex which is later built onto original west facade of the church. The main part represents irregular rectangle length 13.2 m on the west, 13.5 m on the east, and 15.5m on the north and 15.4 m on the south side. This part of the church is constituted by: nave, altar area, indoor narthex, sideway passages and side chapels. The nave takes up the central part of the church which is typical for Byzantine architecture in general. The basic constructional material used for Gracanica construction where stone and bricks. Marble which have been used by builders of Gracanica, is most probably brought from nearby ruins of Ulpiana. Some of the bases and capital of the window pillars are made of trachyte and granite. 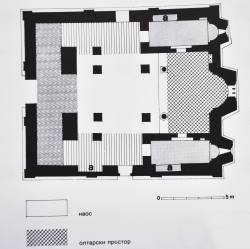