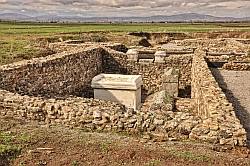 Ulpiana or Justiniana Secunda was a Roman and early byzantine city within the province of Upper Moesia. Its remains are spread over a surface of 70 hectares in the area between Pristina, Gracanica and Lipljan, only 1 km away from Gracanica monastery. Archeological excavations of the site began in 1954 and yet ongoing, but the most significant findings are: marble female head, jewelry from so-called Gotha grave, gilded cross fibula, remains of monuments actually ancient Christian basilica with an octagonal baptistery, established basilica, necropolis which were located in the north and west part of the city, as well as remains of the rampart with watchtowers, castrum or Roman military garrison and hundreds of artifacts.
History of Ulpiana Certainly it is not known when the Ulpiana is established, but it is probably during the reign of Emperor (Marcus Ulpius Nerve) Trajan (98 – 117). Early as the mid – second century obtained the status Municipium, but in III century it contained the Roman Procurator.  Early Christian saints Flor and Lavr where stonecutters, which where according to Christian legend, because of their religion thrown in well. Although the city was surrounded with walls three meters wide, reinforced with towers in the shape of horseshoe placed in the distance of about thirty meters, the Goths devastated city in 471 year. 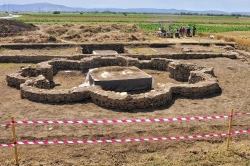 Half a century later, Ulpiana was completely demolished after a big earthquake in 518. The city was subsequently restored by Byzantine Emperor Justinian I (527 – 565), after whom the city is named Justinian Second (Justiniana Secunda), as opposed to Justinian Prime, in present Lebane.